“Lady Bug” and “Pepper” have clowned together for eight years. In 2008, Lady Bug and Pepper met at Morton Plant Clown College with Joye Swisher and Leslie Gibson who showed them how to be “caring clowns”. During the classes, they learned the true art of clowning. They also learned how to put on a clown face, be kind and loving in their “tricks” and “antics”, and be excited about sharing what they had learned. They are both always looking forward to the idea of having fun and letting others enjoy the same.

In their own words:

Pepper: Sometimes our influence is subtle, like when we offer to sing to patients who are imminent and they open their eyes or move their lips as if to sing along.
Sometimes the families themselves benefit from our silliness as we offer a much needed break from the seriousness of their situation, especially those with small children. What really moves US is when patients join in with us and use our humor as a catalyst to tell their own stories. For example, the lady who was a songwriter and offered to sing US a song. That experience was healing for everyone.

It’s hard to remember all of the individual gifts that WE have received as a result of our “work” at Brookside or visiting with patients at a nursing home or hospital, but we do know that we touch lives every time we go. It serves an important purpose–even the times that it may seem like half of the patients are sleeping. So often people thank us for what we do and we tell them that the blessing is truly ours when we see how much their laughter and smiles brighten the room.

Lady Bug: Clown Round days are special! It is those times when we can spread smiles as well as heartfelt comfort to those who are in need. On our scheduled day to visit Brookside (NPCC), a Nursing Home, and Countryside Mease Hospital we are energized and filled with gratitude as we get positive feedback from each person we are fortunate enough to visit.

Lady Bug and Pepper have accumulated quite the “bag of tricks” in these eight years they’ve been clowning together. Whether they revert to their well-rehearsed crowd pleasers (Pepper’s family album, which includes her father, Dr. Pepper, who is not so photgenic and looks much like a soda can in his picture; or Lady Bug’s “fan club” album, which includes an assorted collection of cooling devices that, in Pepper’s opinion, are a bunch of blowhards); or they participate in “drive-by” clowning (where they go for quick smiles by saying things in passing to patients in hallways like “Tell us the truth, are we funny looking?”), their inventory of nonsense is ever expanding. What they’ve discovered together is that they like that just fine. What started out as a genuine willingness to give to others has blossomed into nothing less than some of the greatest lessons/gifts life has to offer—a great friendship, and an inspirational way of life. 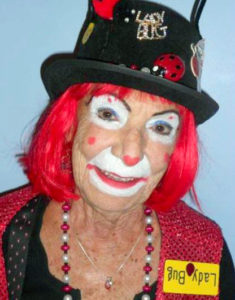 Many years ago, I enrolled in a “Clowning” workshop in Tallahassee, FL. I made this decision because I was eager to learn how to “clown” for my grandchildren who always seemed to want to laugh and play tricks on me and with me. I learned how to put on my clown face; how to juggle; how to make balloon animals; how to play tricks; and perform for an audience as a clown. At that time, I chose the clown name “Serendipity” mainly because it meant happening upon wonderful events when not really in search of them. Serendipity has been my mantra, my pathway in life, and has been my car license plate ever since.

At our Morton Plant clown workshop, I decided to change my clown name to the newer clown name “Lady Bug.” This was because a ladybug sat on the windshield of the first car I ever owned. I named it Lady Bug. I also decided that all of my future cars would be given the same name, Lady Bug 2, 3, 4, and now 5. So it was just logical that my car’s name, which was so much fun for me, should also be my clown name.

My current car is a red mini cooper. When my clown partner Pepper and I are doing our clown rounds, this red mini is transformed into a Lady Bug Limo. Pepper’s gift of 10 inch black magnetic circles are attached to all sides.

It was at our “Clown College” eight years ago in May of 2008, when this young, attractive, Forest Ranger Tracy, asked me if I would be her clown buddy. The sparkle of her eyes, her sense of humor, her fun self, and her enthusiasm grabbed my heart. I immediately said “YES!” Since then, we have shared these eight happy clowning years together. 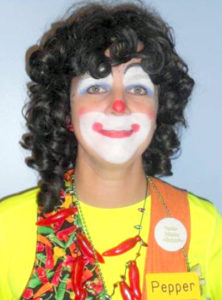 In 2009, I discovered that I was a clown. I was working as a ranger for the Florida Park Service and had dressed up for a Halloween event in order to goof off a bit. After witnessing my shenanigans, many of the folks asked me if I had ever “clowned” before. I stated that I had not, unless you counted all the silliness that I had instigated for as long as I could remember. A week or so later, there was an article in the newspaper for a “Caring Clown College” that a coworker pointed out to me. I attended and discovered that clowning is not so much a profession but an innate set of characteristics that many (possibly all) of us share, much like hair color, or perhaps more like misshapen toes.

I met Audrey, aka “Lady Bug” and knew immediately that I had found a kindred spirit. Light of heart with no apparent sense of direction, organization, or attention to so-called “rules,” she seemed like she would be a perfect clown “buddy” for me. I only hoped that she felt the same way; it’s a delicate business, the partnering of clowns. I mustered the courage to ask her to join me in this ridiculous journey and she accepted. We’ve clowned together ever since! Although I started as a Morton Plant (hospital) volunteer, Lady Bug soon convinced me to join her and clown as a Suncoast/Empath (Hospice) volunteer as well. What can I say? She’s cleverly encouraging like that. As for my name “Pepper”, since I spent the majority of my days at the park where I worked eradicating the nasty weed “Brazilian pepper”, it seemed like a logical choice. It stuck. Achoo!